The Mazda MX-5 Club of NSW has spread across NSW and ACT with seven regional Chapters, each providing a range of events and social gatherings in those regions. Events organised in ANY region are open to ALL Club members, regardless of where you live. There are no "walls" in our Club! 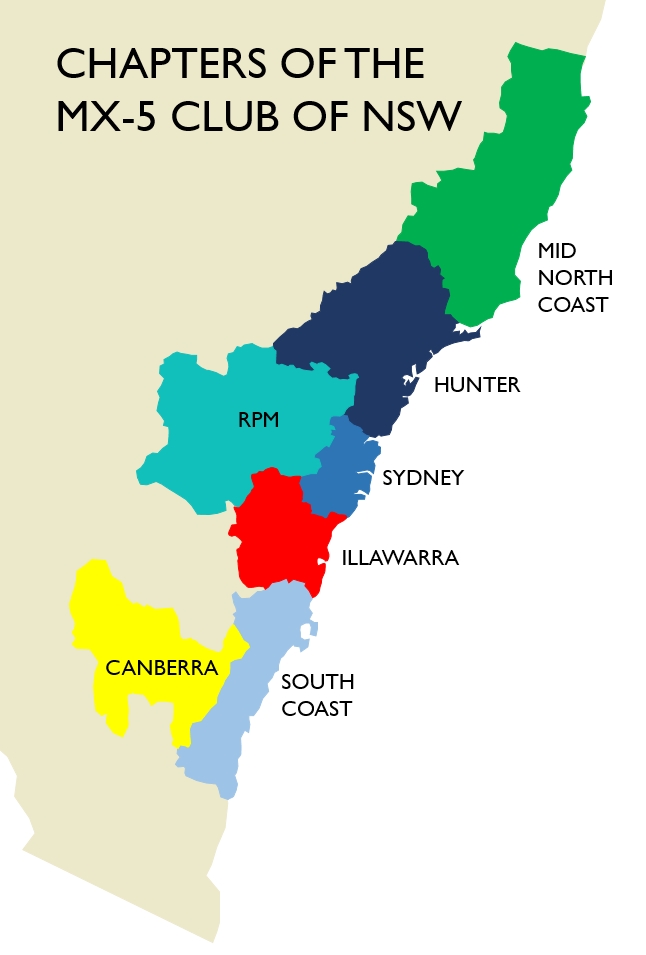 The Sydney Chapter is the largest with about a third of our members. Sydney Chapter offers a variety of social events and runs for those who wish to escape the city roads.

The Hunter Chapter was formed in 2006 and serves our members in Newcastle and surrounding LGAs including Lake Macquarie, Wyong, Gosford, Port Stephens, Maitland, Singleton and Cessnock.

The Illawarra Chapter was formed in 2012 and serves our members in Wollongong and surrounding LGAs including Shellharbour, Wingecarribee, Wollondilly and Kiama.

The RPM Chapter (for "Rivers Plains Mountains") was formed in 2013 and serves our members in the Blue Mountains and surrounding LGAs from Penrith & Hawkesbury to the Central West.

The Mid North Coast Chapter was formed in 2013 and serves our members in Port Macquarie and surrounding LGAs between Great Lakes / Gloucester and Coffs Harbour.

The South Coast Chapter was formed in 2019 and is centred at Milton/Ulladulla, serving our members from Shoalhaven in the north to Eurobodalla and Bega Valley in the south.

We also have members in other regions of NSW that do not have their own local Chapter, but are represented by a central contact person. If you're in New England, Central West, or Riverina, please give them a call.

The BreakFast Club is a special interest group with no regional affiliation, which suits those who crave the twistiest and most challenging bits of blacktop that can be found - usually finishing with a hearty breakfast.

Not enough activity in your region? Please let us know and we can advise how you can get involved.