Sunday 15 May 2022 marked the 10th Anniversary of the Illawarra Chapter of the MX-5 Club of NSW. A wonderful celebration was planned for this landmark occasion. On the morning, a sea of red gathered in the Hungry Jacks carpark at Haywards Bay. There were lots of reunions, catch ups and coffee ahead of the briefing. Bryan assembled and welcomed the group of 47 people and 27 cars at the start of the run. Our cavalcade included all generations of the MX-5 family and 9 non-MX-5 ring ins also. There were a pair of our Abarth Spyder brethren (Jan and Hella & Mark), an Audi A3 (Peter & Jill), BMW (Brendan & Anna), Ford Ranger (James), Hyundai i30 (Jeff & Pam), Mercedes SLK (Wally & Pat), Subaru Forester (Adele) and a sparkling yellow and green striped Ford Mustang (Kerry & Jacqui). It was wonderful to have Julie & Paul Farquhar make the long trip from Newcastle to meet up with old friends.

As the weather forecast was uncertain, the hardy and hopeful stowed roofs for the start. With four assigned wranglers, we headed off on our carefully curated run, winding through Jamberoo, Kiama, Gerringong, Coolangatta, and Bomaderry. Our counter clockwise loop through Kiama, included a single lane section through the old railway cutting.

Dianna & Bret, in their ND-RF, joined our convoy at Gerroa. The route was mostly left turns, minimising the number of traffic snarls and kept our convoy fairly well together. There was only one break away group (no, it was not lead by Senia ) but they were returned to the main herd after only a short time. The views down along the coast and winding inland along the Shoalhaven River were spectacular. Increasing showers saw most of us pull tops up before our final run into Cambewarra Estate Winery. Sooty was the last man standing, begrudgingly donning his roof, as we reassembled at the final turn.

A beautifully prepared room, in a lovely vineyard setting, awaited us. Another 10 people made their own way to the winery, for a total of 57 people. Unfortunately, President Peter Battisson was a late scratching due to several unanticipated road closures on his way from Canberra. Fiona set up her regalia store and was inundated with orders for even more of our characteristic red merchandise.

A delicious three-course meal was enjoyed, with lots more conversation. Bryan presented each person in attendance with a commemorative metal badge. A pause before dessert provided the ideal opportunity for Bryan to look back over the 10 years of history (see the slides here). The founding members were acknowledged, and the motorsport connection. Foundation meetings, the first run and subsequent build of membership were revisited. Past and present Conveners and Members of the Year were acknowledged. It seemed fitting that Naomi, girlfriend of the original, youngest chapter member Alex, was welcomed on the day as our newest Illawarra member. There was a quiet moment too, where the passing of previous members Sandra Reid and Janet Wheeldon, was respectfully remembered. 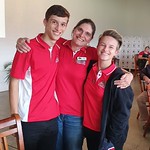 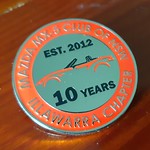 Thank you to all involved in planning and delivering this amazing event. It was a fabulous, stylish and fitting celebration for the Illawarra Chapters 10th Anniversary. May there be many more!