In these days of disposable everything, it is rare that something can last for 25 years. Not only has the MX-5 Club of NSW survived for quarter of a century, it has thrived. So how best to mark this unique achievement?  Preparations for the event began many months ago with one clear goal; the 25th Anniversary celebration on 27 September 2015 at Ottimo House must be all about the members. Those who founded the Club, those who have belonged for a few days or many years, and those who will take it into the future. 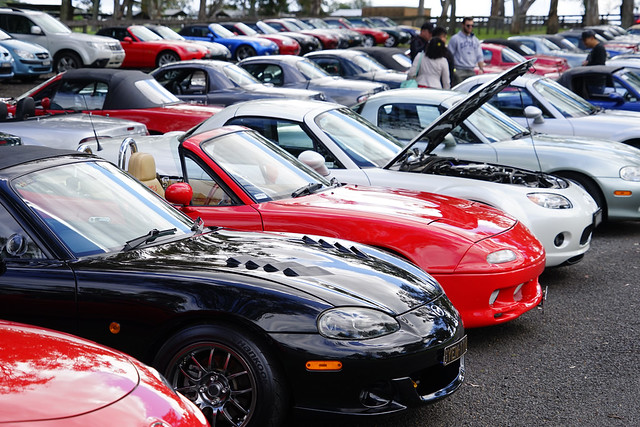 It was a massive undertaking. 400 morning teas, 234 lunch guests, 80 day pass holders, 150 MX-5s, 200 gift bags, 12 trophies, 5 key speeches, 5 violinists and 1 air-horn. Fortunately Club Captain Michael Soulos had a comprehensive battle plan. At 8am there was a mass landing of volunteers, armed with wristbands and traffic cones, prepared to do battle against chaos. Throughout the morning, wave after wave of fresh recruits manned the registration desk, answered questions, marshalled the car park and prepared the lunch venue. Their efforts kept chaos at bay and guests enjoyed a smooth arrival, safe parking and clear directions to all the activities. 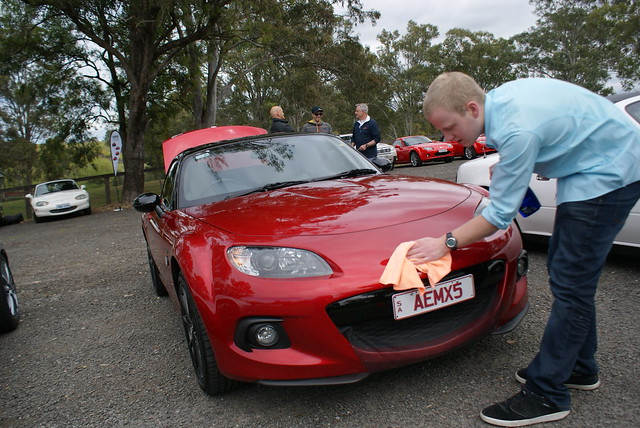 It was still chilly at 9am when many volunteers headed over to Forsyth’s Coffee Cart. Rob Forsyth, a world champion and internationally respected coffee judge, provided coffee and breakfast for the grateful troops. Operating his four gruppe machine with a graceful, almost surgical, precision – Rob wasn’t just providing hot beverages, he was saving lives. Bob went on to serve over 400 morning teas of coffee and cakes with skill and humour. An order for a double shot, extra hot, cinnamon, soy, no-foam non-fat latte was met with a smile. And a flat white. Next door at the Regalia stand, Pam and Ray Estreich were unloading their boot-load of booty. As outgoing Regalia Officer, Pam has designed and sourced a collection of high quality polos, chambray shirts and fleeces and a wide range of accessories. In scenes reminiscent of Boxing Day at Westfield, Pam and Ray outfitted the crowds in the very latest in MX-5 Club fashion and sold almost every item.

Meanwhile, the carpark was a blur of buckets and buffers as the Concours and Show 'n' Shine entrants were prepared for their big moment. The excitement was barely suppressed as the judges donned the white gloves of great responsibility and began the arduous task of determining which of the excellent MX-5s on display was the excellentest. Guy Coles has been instrumental in resurrecting the Club's Concours event over the last four years and has developed software to accurately record and process the judge’s findings. Judging is an acutely detailed (and now scientific) bonnet to boot process with deductions being made for any non-original features, bumps, smears or smudges. There was no less attention to perfection in the Show 'n' Shine modified performance and modified appearance categories with row upon row of sparkling interiors and gleaming exteriors in display. Graham and Gillian Fletcher undertook election official duties to tabulate votes in the People’s Choice Award. The ND display was also popular with many taking the driver’s seat for a pretend test drive. Although the ND was not subject to judging, the verdict would most certainly have been; “I’ll take it.” 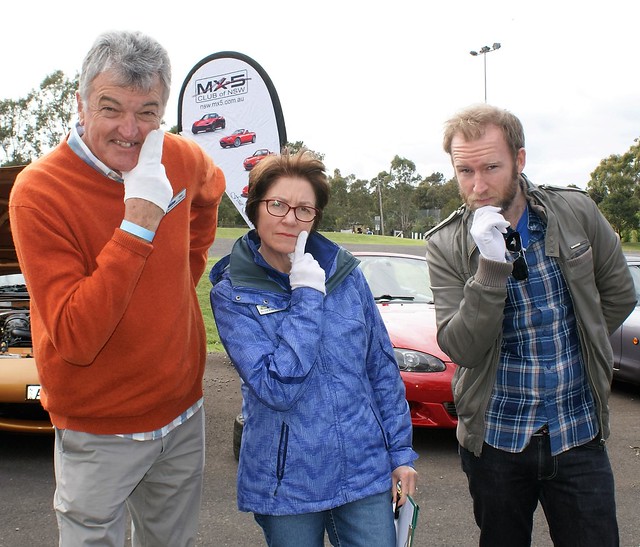 Congratulations to the winners:- 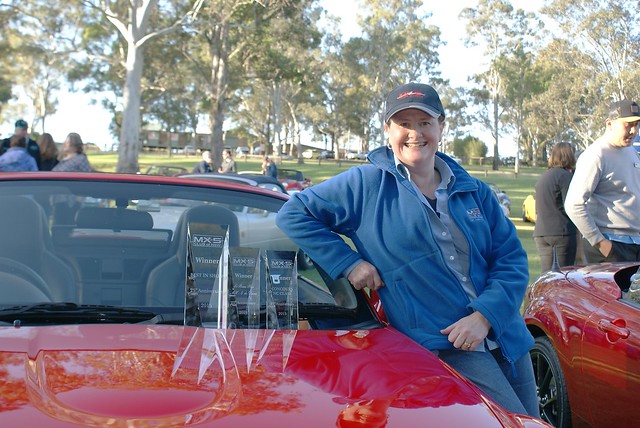 Just before lunch, bright sunshine escaped the cloud giving us perfect track conditions for the Wacky Races. Illawarra’s Chief Steward was in charge of the air horn and she wasn’t afraid to use it as teams completed their preparations on the starting grid. An aggressive start by Illawarra, RPM and Sydney resulted in a number of spins on the first corner. Fortunately there was no contact but the fans were left in no doubt that Wacky Races are a serious business. Multiple racing incidents left debris strewn across the field but the absence of a safety car left racers dodging footwear, equipment and sunglasses as they struggled to maintain their lines.  There was tension in the pits as it became clear that team orders would determine the outcome of the three-legged race whilst our rookie racers excelled in the sack race; showing a grace and athleticism that, perhaps not surprisingly, outclassed their elders.  A waitressing challenge marked the slower section of the course with our experienced racers showing all the respect and reverence a tray full of champagne flutes so thoroughly deserves. 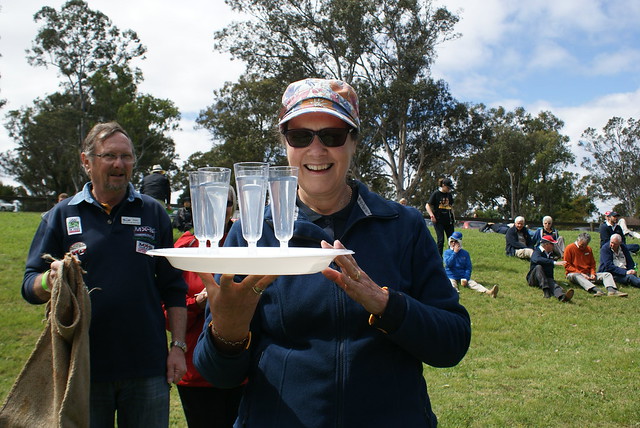 There was a brief moment before lunch to enjoy a performance from the String Quintet. Featuring renowned violinists Amba Mercuri and Sarah Moir accompanied by her family (Joel, Heath and Ashleigh), the ensemble created a relaxed ambience to accompany a drink from the bar or a stroll to the duck pond and ponder the question “how’s the serenity?” It was all bustle in the Rosewood Room however as Lesa Bunn and her band of assistants put the final touches on the lunch preparations. Lesa had worked wonders with the table plans and seating arrangements, distribution of gifts and design of the impressive lunch menu. With thanks to Lesa, guests enjoyed an antipasto entrée and chicken or beef main course. A clever choice of a light panacotta dessert ensured there was plenty of room left for a slice of the anniversary cake. 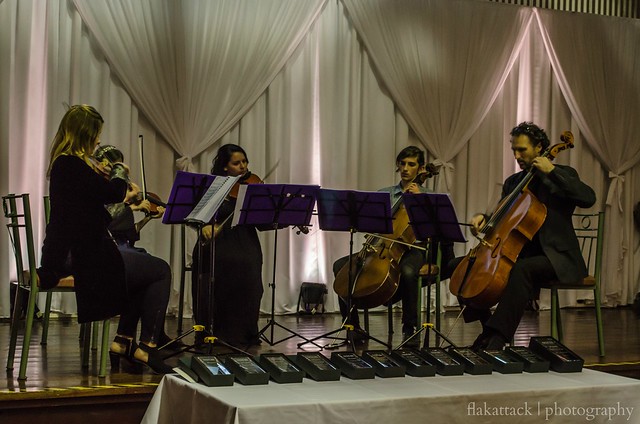 Proceedings commenced with a processional of our special guests. First were the Foundation Members Ross Hutcherson and Colin Caldwell and his wife Elaine who is our Club Historian (Jim Hull couldn't make it). They were followed by Life Members Zan Menzel, Jean Cook and Mike and Cobie Hicks. Also at the top tables were our sponsors; Mike Dawson of Mazda Australia, Peter, Lia and Don Battisson of ACDC, Michael and Denise Hall of Deckspeed, Dominic Nolan from Soft Tops Online, Mauro Consalvi from Hume Smash Repairs, David and Toni Battisson of MX5 Solutions and Cameron Macarthur from Blue Mountains Mazda. 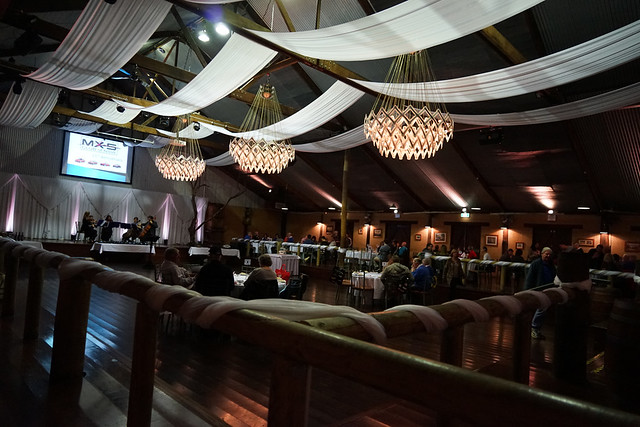 A highlight of the official programme was the presentation of a Life Membership to Club President Bryan Shedden. Proposed by Vice President Glenn Thomas and endorsed by the Committee in the strictest of secrecy, Life Membership recognises extraordinary and ongoing contribution to the Club. Since joining the Club, Bryan has been an active member of the Committee including the role of President since 2012. Bryan is someone for whom the benefit of members is paramount. He keeps a close eye on all Club activities to ensure there is something for everyone and is always available to assist the Committee as they perform their roles. 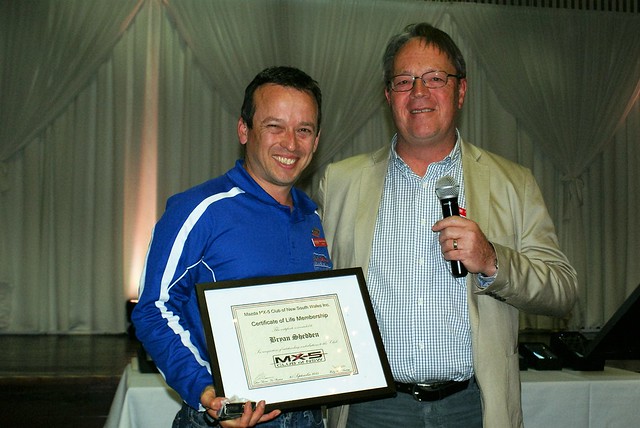 In normal circumstances, the time following a delicious lunch and lots of laughs with friends would be spent in locating a shady spot to indulge in a refreshing nap but Michael had other ideas. A Line of Fives, representing one of every MX-5 model, was to be corralled in the paddock for a photo shoot. 30 MX-5s were directed, with much arm waving, through the trees and parked and re-parked in front of the stage. Surrounded by a crowd of proud owners, the front row was an impressive line-up of MX-5 history from a mint condition NA to a sparkling ND. It was a fitting end to the day. 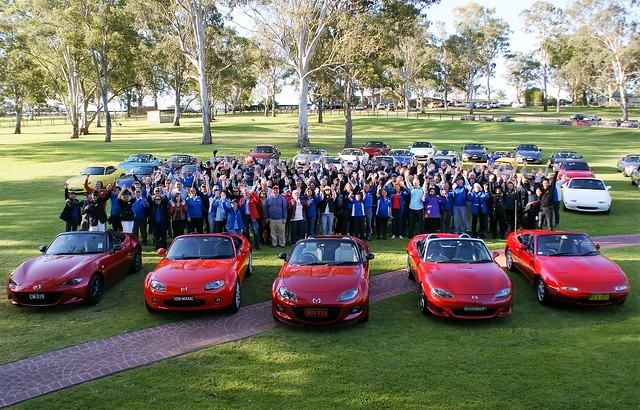 The Committee would like to acknowledge and thank all the volunteers who made the day such a success. Our thanks also to the professional and friendly staff of Ottimo House. There will be a photo gallery of the day in the next issue of Club Torque.