DAY ONE – It was a cool and cloudy day when 7 MX-5s departed McDonalds Woonona. The promise of rain did not deter us putting our roofs down to enjoy some much-craved Vitamin D. Fortunately Bulli Pass was open to light vehicles so up we went enroute to Appin. We traversed the more scenic parts of Appin before enjoying some green countryside thanks to recent rains. Morning tea was again at Maccas in Cranebrook – a new spacious modern franchise with plenty of space to line up our pride and joys for a snap or two. With morning tea complete we departed for Windsor where we undertook a revised route to circumvent recently closed roads/bridges, in fact we obtained a front seat view of the ravages of the recent floods as we passed over one of the bridges on the outskirts of Windsor. Our journey continued through Glenorie where green paddocks and small holdings were in abundance with some very large stylish country houses – some might call estates. On finding our way to Wisemans Ferry we sat down to an enjoyable lunch at Wisemans Ferry Inn. Each meal was resplendent with huge portions of chips which many of us battled to finish. After lunch we made our way down to the ferry (past some signs that said ‘Road Closed – Only Residents Proceed.’) We were to learn that this was a local initiative to discourage large numbers of day trippers! We all boarded the ferry and I (Lena) was fortunate to be invited up onto the bridge to take some pics of the cars. On disembarking we made our way along Wisemans Ferry Road dodging potholes, sinking verges and anything that you can name. The flood water damage was evident in abundance. We stopped to put our roofs up some 15 minutes from Gosford and thank goodness we did because not 5 minutes later the heavens opened-up and another rain bomb was dispatched! 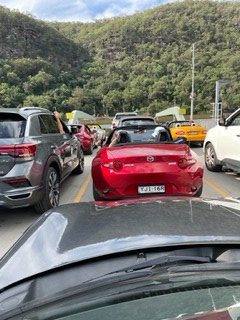 We arrived safely at Gosford Palms Motel and after unpacking we congregated for 5 o’clock drinks. The intermittent rain drove us indoors where we congregated in Bryan and Ann Hicks room – very cosy! Anyway, after some stories and tales washed down with snacks and drinks we made our way to Settlers Tavern Inn for our evening meal – yes food again just in case some were hungry!

DAY TWO–the next morning all were sharp, ready and waiting (as per Wesley’s briefing) to depart at 8am for Brooklyn to board the ferry. The earlier than usual start was to ensure we could all find a place to park. Some decided to breakfast at the local café in Brooklyn before boarding the ferry. On the ferry we were fortunate to be allocated the top deck (almost exclusively) where we had panoramic views of the river and the inside of the boat’s bridge where our captain – comfortably multitasking in not only steering the ferry but also providing a very interesting commentary about items of interest and historical significance along the river.  Our captain was really multitasking as he admitted to owning an MX-5 and being a member of the club! The ferry made several requisite stops to both drop and pickup mail (and occasionally some other packages). 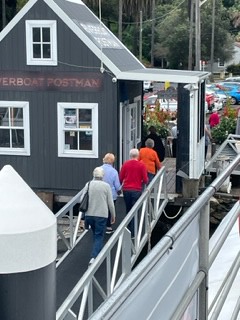 We were well fed on the ferry – morning tea was served together with homemade Anzac biscuits followed by a light lunch consisting of meat and salads. Although it was raining intermittently with some mist, we were still able to go outside and take some photographs including some interesting rock features (e.g. Eagle Rock),

some flora and fauna and several Fish River Eagles and nests. Places of historical note included the history of the Old Hawkesbury Railway Bridge built in 1889 before being replaced by the current bridge in 1946 (the existing pylons remain to this day and couldn’t be destroyed for fear of damaging the new bridge), and 8-hectare site on Peat Island established as an asylum for inebriates in 1911 before it reopened as a psychiatric hospital. The two- and a-bit hour cruise seemed to pass so very quickly and ended on a sweet note with the provision of an assortment of chocolate delights.

All in all, it was a lovely run and we highly recommend the Postman River Ferry to your bucket list. Indeed, there is a lot of scope to return to the Hawkesbury to sample some of their other cruises and learn more about the history of the region. The run was a tapestry of good roads, tasty food, and of course good company. Thank you to all those who made this run so enjoyable.