The winners of our annual Member of the Year awards were presented last weekend, and the runners-up will be presented this weekend. As I am a resident of the Illawarra Chapter, I was delighted to see the efforts of the current Convenors Jan & Garry Gibson, rewarded with two Club MOTY awards going to the 'Gong.

Member of the Year

How do you win this award? It's all about getting involved with the Club activities by participation and helping. And boy oh boy, did Phil tick those boxes! Our MOTY records show that Phil participated in ...

Phil is also the Regalia man for the Illawarra Chapter - a role that he does not receive any MOTY points for. It's wonderful to see this award going to a person who has done so much with and for the MX-5 Club of NSW. The award is also a welcome tonic in tough times as Sandra - who very nearly claimed the "runner-up MOTY" award - has been seriously ill and in hospital for the last few months. All our thoughts and best wishes to Sandra for a speedy recovery. Congratulations Phil!

MX-5 Club members, particularly those in the Illawarra Chapter, will be deeply saddened to learn that Sandra Reid passed away on 21 January after four months of illness. We extend our deepest condolences to Phil, their daughter Samantha and all extended family members. 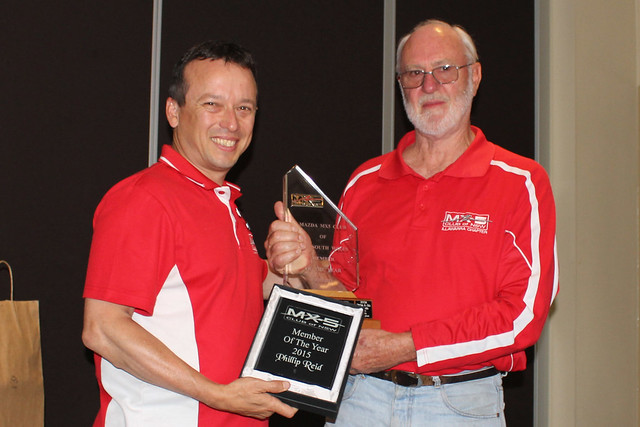 Runner-Up Member of the Year is Bob Judd. Another former Chapter Convenor - the Canberra Chapter - has been recognised for his participation and contribution in 2015. Bob participated in 8 Coffee & Lies, 10 day runs / social events, and the 4 day trip to Bright. More significantly, Bob organised and participated in the 9 DAY Great Gippsland Gallivant at the end of October - an amazing feat which earnt him almost two thirds of his MOTY points tally. The runner-up presentation occurred at the Canberra Chapter Christmas Function on 13 December 2015. Unfortunately I was unable to attend as I was competing at the club track day. Thank you to Tony & Iris McDonald for looking after the presentation. Congratulations Bob.

New Member of the Year

The 2015 New Member of the Year is Julie Farquhar. Julie and hubby Paul joined the Club in January 2015 and in only 10 months, she still earnt enough MOTY points to beat all other candidates. During the year, she participated in 7 runs (including two weekend trips), 9 Illawarra Chapter dinners, 3 Chat at Chats, assisted at the 25th Anniversary Day by organising the Wacky Races, and contributed a couple of wonderfully written Club Torque articles. Julie is also a bit of a whiz with the sewing machine and whipped up the fabulous Illawarra cheer squad bibs for the Jinba Ittai Challenge. Sadly, Julie has also been battling a serious illness in recent weeks and it was a big effort for her to attend the presentation and be recognised for her exemplary start with the MX-5 Club of NSW. Good luck with your treatment and recovery Julie, and hearty congratulations on your award! 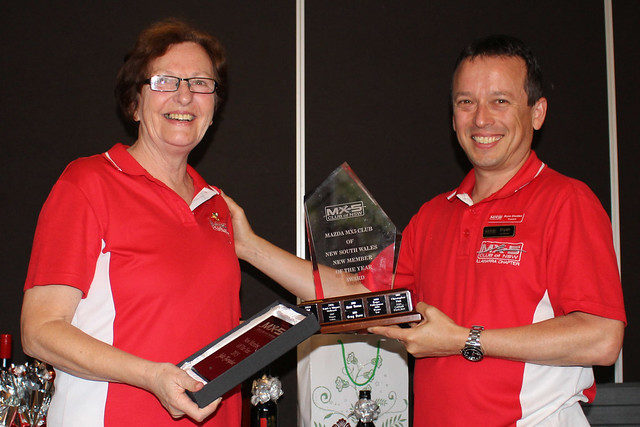 Runner-Up New Member of the Year is Vicki Legge. Vicki and hubby Ray joined the Club in February 2014, and completed their first full year in 2015. Vicki has become a vital part of the RPM Chapter, and is always the first to share her photos of RPM runs on the Facebook Group. She participated in 10 runs/events, organised or assisted with several of them, and contributed to Club Torque. RPM Convenor Lesa Bunn presented Vicki with her trophy at the Chapter meet-up for the Australia Day Run. Well done! Committee members and their partners are ineligible for MOTY awards and are not included on the points table. Former recipients of the awards are also ineligible.