Three weeks after their maiden victory at the NSW 6 Hour, the Panorama Mountain Men (PMM) ventured South to Melbourne’s Sandown Raceway to contest the Mobil1 360 Six Hour Relay on 3 April 2022, hosted by the Porsche Club of Victoria (PCV). With Bryan Shedden unable to get the time off from work, Greg Unger stepped back into the team to join Glenn Thomas, Stewart Temesvary and Gus Elias, who had fully recovered from Omicron.

Even though the team was at full strength, they were under no illusions that the task ahead of them was going to be easy. With Greg being the only driver who had previously competed at Sandown (once in January 2017), they knew winning the event would be like scaling Everest with all 4 driver getting familiar with the track, decide on times to nominate, decide on strategies applicable to the event, etc. etc. Realistically hopes were to finish in the top 10 and anything better than that would be a bonus.

The PCV event is run in conjunction with an MSCA event on the Saturday. Greg, Glenn and Stewart were using the MSCA event on Saturday as familiarisation / practise. Despite the weather forecast only predicting a 5% chance of rain on Saturday, all three of their sessions at the MSCA event were run on a wet and greasy track, so they had no idea what times could be achieve in the dry.

The final session of the Saturday was PCV practice and Gus was using this to familiarise himself with the track. As it turns out this session was back to a dry track, so Gus practiced in the Dry and had no idea what wet times he could do. Unfortunately, towards the end of that session his NB8A suffered gearbox failure, with the car locked in third gear and unable to get it out of third no matter how hard we tried.

The supp regs required that no single driver does more than 100 minutes, so the team could not run as a three car team like at Eastern Creek. As manager of the team, Stewart made the decision to share his own NB8A with Gus, as his 10AE was probably the car that was closest in handling and feel to Gus’ car.

With the weather forecast saying only a 20% chance of rain on Sunday, Glenn, Greg and Stewart would have liked to nominated “dry” track times, but chose to nominate “wet” track times because they were the only times known. They knew this may mean just cruising around the track at a slow pace if it didn’t rain.

Early Sunday morning Gus made the decision to also nominate a “wet” time. Changes to nominations had to be done prior to the Sunday practise and as Gus had not driven his or Stewart’s car in the wet, Gus nominated the same wet time as Stewart. Some quick instruction from Stewart and then Gus utilised about 20 minutes of the Sunday morning’s practise to get in the groove.

The start of the event saw a dry track and the drivers had to circulate at about 15 to 20 seconds slower than the expected dry times. Braking at the 150 metre mark rather than the 50 metre mark, limiting the back straight top speed to 140km/h etc., etc. In our opinion it is easy for a good driver to go flat out and be fairly consistent, but it is much harder to be able to circulate consistently at about 15 to 20 seconds slower than full pace.

Thankfully despite the forecast, rain did arrive after about two and a half hours and the track came to our nominated wet times. Those teams that had nominated dry times were then struggling to get anywhere near their times.

To the PMM drivers’ credit, they were in the middle of the pack (12th) after one hour of competition and 11th at the two hour mark. By the halfway mark they jumped to 3rd, with the arrival of the rain affecting most teams. This is about the time when the team started to think they might be in with a chance of a podium finish. With only two hours of competition left the team was 2nd and going into the final hour they were in the lead from a Porsche team, and held that lead until the chequered flag. 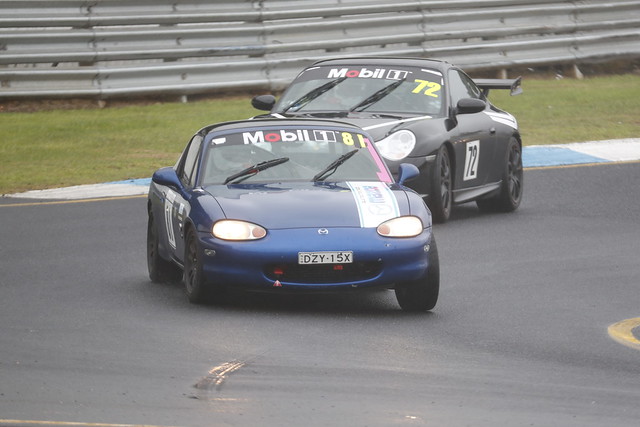 To highlight the differences in speed and nominated times, the team’s start driver, Stewart was lapped by some GT3 Porsches after only about two laps of the event. By the end of the day PMM had covered 17 laps less than the fastest teams. However, the scoring is based on points per completed lap, so this did not disadvantage any of the teams.

Motor racing legend John Bowe and the MD of the Mobil1 Distributor presented the trophies. JB recognised us from the presentation ceremony at Phillip Island in 2018, and we had a brief chat with him. Later he commented on Facebook about our Sandown victory saying “The event was won by a team of Mazda MX5s! They were amazing!”

The victory now means the Panorama Mountain Men is the only Regularity Relay team to ever win all four regularity relays on the East Coast, something the team is immensely proud of.

The current combination of drivers came together in 2017 and since then have competed in 10 regularity relays, taking out first place in 7:

Panorama Mountain Men are the reigning champions at all 4 regularity relay events!

While these are all great achievements, the victory at the Porsche event is probably the sweetest because it was the team’s first time at the event and they really expected to not be in contention for the podium.

The team now starts focusing its attention on the 2022 Victorian 6 Hour at Phillip Island on 30th and 31st July 2022. 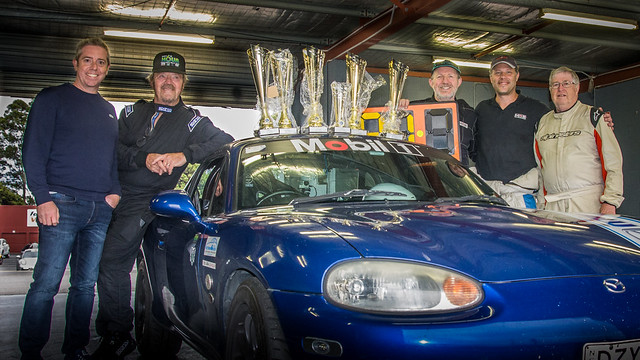